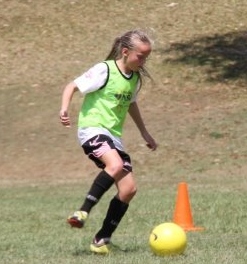 Eleven-year-old Harry Arnison and 12-year-old Hannah Taylor have each been awarded scholarships, which will provide payment for their tuition at Peregian Beach College and their registration fees for participation in a Sunshine Coast FC National Premier Leagues team or Academy.

Both Harry and Hannah have been developing their skills in the Sunshine Coast FC Academy and have applied to trial for the 2014 Under 12 Boys and Under 13 Girls NPL teams respectively.

The young footballers are looking forward to becoming part of the Fire and Peregian Beach College families.

“The scholarship will be a great opportunity to enhance my football and academic skills. It will provide me with the chance to become part of the Fire and Peregian Beach College while assisting my own family with the costs incurred,” Hannah said.

“They had a clear vision for their future and are keen to combine both education and football training and to succeed at both,” he said.

He was confident Peregian Beach College would allow the new students to excel both on the pitch and in the classroom.

Mr Woodall and Mr Shirley are continuing to evaluate applicants to award more Elite Player Scholarships for the 2014 season. The scholarships will initially run for two years, with the possibility of extension should recipients continue to meet the scholarship standards. The combined value of the scholarships could reach in the order of $500,000 over the initial two years.

Mr Woodall said he was pleased with the quality of the applications he had received and was continuing to receive.

“I am personally excited that the scholarship program is providing real opportunity to deserving, talented young people.”

If you would like to apply for an Elite Player Scholarship, please send an expression of interest to Robyn Chapman at admin@sunshinecoastfc.com.au.