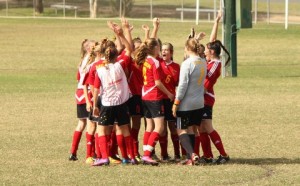 Sunshine Coast FC is now accepting applications for Elite Player Scholarships for young players to compete as part of an NPL Fire team.

The new scholarships will be the most valuable school/football program in Queensland, with a combined value in the order of $500,000 over a two year period.

The scholarship program will provide successful applicants with payment of tuition fees at Peregian Beach College, and for participation in a Sunshine Coast FC elite team competing in the National Premier Leagues.

Managing Director Noel Woodall announced the new program on Thursday, August 1, and said it was designed to offer the best opportunities for gifted young footballers both academically and on the field.

“At Sunshine Coast FC, we want to provide an opportunity for young players in terms of football development, however we also understand the importance of education,” Mr Woodall said.

“If we can provide quality education and quality football development, we can give deserving young players on the Sunshine Coast a chance of real success.”

The scholarships will commence in the 2014 academic year and football season. Players from the ages of 12 to 16, in class years seven to 11 will be eligible to apply for the scholarships. They will initially run for periods of two or three years, with the prospect of extension if players continue to meet the scholarship standards.

Mr Woodall said the scholarships also acted as a great way to promote football development on the Sunshine Coast, and to involve young players in the NPL pathway.

“I believe this opportunity will stimulate interest in the NPL among young footballers; they are able to become a part of the only national club based on the Sunshine Coast, and to compete in the second-tier football competition in Australia,” he said.