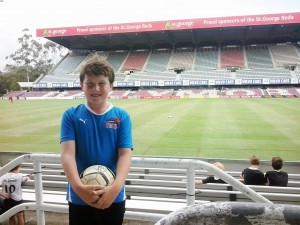 For young Academy player Rory Stenhouse, an invitation to a train with Roar conditioning coach Ken Stead was an opportunity not to be missed.

Ten-year-old Rory was one of 16 lucky players invited to a one-day Brisbane Roar Academy held at historic Ballymore. He joined fifteen other under 12-year-old footballers from Toowoomba, the Gold Coast, Ipswich and Brisbane on March 9 for the training session.

Prior to the session, Rory and the other players were treated to a tour of Ballymore’s changing rooms, giving them a valuable insight into the inner workings of match-day preparation.

The dreaded ice-bath was there for players to see and an impressively equipped gymnasium and physio treatment room. 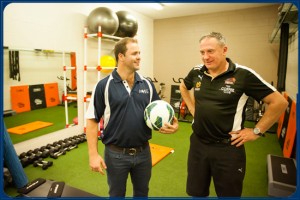 During the tour Ken showed the players a whiteboard and pointed to the word COACHABILITY.

He emphasised how important this was for the young players – he asked them how coachable they were and whether they listened to their coaches.

“We want to give the young players an experience today which will let them see what a day in the life of a Roar player is like,” he said.

Ken said he believed the initiative taken by the Roar in terms of conditioning training had revolutionised not only the Roar but the entire A-League.

“I am off to Europe soon to give a talk at a conference and teams like Celtic, Manchester City, Chelsea and Porto are all looking closely at the Roar’s training methods with a view to taking them on board.

“That is how far reaching the success of our methods has gone.”

After the training session, Ken left Ballymore for Suncorp to help the first team prepare for their match against Melbourne Victory.

After the sessions, the sixteen players gained free entry into Suncorp Stadium to watch the Roar play Melbourne Victory which ended in a 1 -1 draw. The A-League spectacle was even more exciting for the youngsters as they were able to watch from a corporate box.

It was a great day for the young footballers and an experience Rory will never forget.